You know the saying, “All publicity is good publicity”? Well, not in this case.

Toronto brand Homeless is being accused of exploiting the impoverished by trying to turn a profit with questionable merchandise. Their website sells merchandise like t-shirts with the word “Homeless” emblazoned across the chest, “Change Please” on tin cups, and “ragged” dip-dyed tops and sweaters. Prices range between $20 and $155. 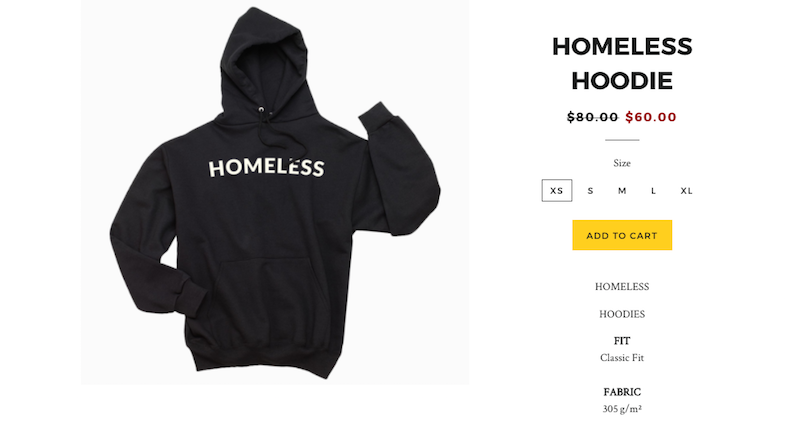 TODAY in “I fucking hate everyone” – new brand in Toronto exploits & profits from homeless – https://t.co/IOB2eD8B7S https://t.co/isV6rlnRqc

Novel idea: creating a brand that gives back to Toronto’s homeless *without exploiting them as caricatures*

But the creators of the brand are saying that people have it twisted. In an interview, co-founder Trevor Nicholls told Flare that they are driven by a serious message, a message that is suppose to help those in need, not exploit them.

On social media, Nicholls shared his personal story of what inspired the brand, a story of his own hardship and experience with homelessness. According to the Homeless Toronto website, each member of the team has been personally affected by homelessness and the brand is a way to give back.

The website claims that 40% of proceeds will go to helping those in need in Toronto, whether it be by giving food, water, unworn clothing to those on the streets, or monetary donations to shelters and charities like Eva’s Place. When Vice reached out to Eva’s Place, however, a spokesperson for the organization claimed that they were not aware of any conversations that had taken place between them and the brand.

While we understand what the brand is doing, we’re going to go ahead and say that it is pretty tasteless. Homelessness is an issue that does need more awareness, however, this is not the way to go about it.

What do you think about Homeless Toronto?

Posts You May be Interested In:
Department Store Blasted for Releasing Pro-Rape T-Shirt
Urban Outfitters Seems to be Unable Not to Offend People
Vegan Hard-Liner Harasses Patrons at Vegan Restaurant for Wearing Canada Goose
Canada Goose CEO Flees New Flagship as Protestors Crash Opening
Would you Steal a Pair of Air Yeezy’s from a Homeless Person? These People Tried