Calling all Spider-Man fans! If you’ve ever wanted to get your hands on your own authentic spidey suit, Doritos Canada is giving you a chance to live out your fantasy — but you’ll have to be extra bold.

On Friday, July 5, 2019, Doritos Canada will be popping up in Toronto with a once-in-a-lifetime opportunity.

In honour of the new summer blockbuster, Spider-Man: Far From Home, Doritos Canada is giving fans the chance to win an official replica of the Peter Parker’s new “Black & Red” suit. And it isn’t your typical off-the-shelf costume.

The Incognito Doritos Suit is exactly what its name describes it to be: an undercover Doritos bag that transforms into a “Black & Red” suit replica, “so you can keep you identity safe and a secret,” Gil Wizen, an entomologist (aka spider expert) working with Doritos Canada tells us. “The costume is actually made and designed by the costume designer [Shafton Inc.] of Spider-Man: Far From Home.”

There are only six Incognito Doritos Suits up for grabs in all of Canada.

So getting your hands on one won’t be easy. To earn yours, you’ll need to put your courage to the test in Doritos Canada‘s “A Suit For The Bold” challenge. Those brave enough will put their hand into a two-tiered box filled with wolf spiders and a tarantula under the watchful eye of Gil Wizen, who was previously ROM’s Chief Spider Wrangler. Once they’ve passed the creepy crawlies, they’ll push a button on and off in order to receive a contest ballot. 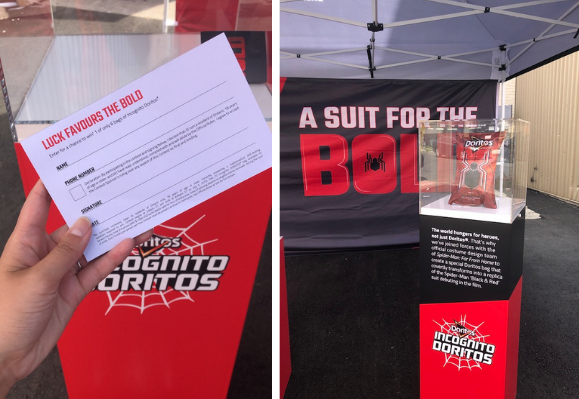 The pop-up is just down the street from Scotiabank Theatre, so you can easily stop by before or after you catch the movie. And those daring enough for the bold pursuit won’t walk away empty handed — each participant of the “A Suit For The Bold” challenge will get to take home a bag of Doritos, too!

We had the opportunity to preview the “A Suit For The Bold” challenge before it opens on Friday, July 5, 2019. Take a peek at our experience below.

If you aren’t able to make it to the “A Suit For The Bold” challenge, don’t fret!

Doritos is also hosting a Spider-Man: Far From Home “Activate Your Spidey-Senses” contest online so that you can join in on the fun from anywhere! All you have to do is head to doritoscontest.ca to enter, and don’t forget to play the Doritos “Spidey-Sense” challenge for your chance to win a European adventure for two.

The Top Brands That Have Expanded In Canada In 2021

Two Canadian Retailers Are Thriving Despite The Pandemic

The Top Items To Shop At The Sephora Spring Savings Event