If you’re looking for the total package, our next Style Spotlight it is.

Allow us to introduce you to Jessi Cruickshank.

You may recognize her from your days of binge watching The Hills: The After Show and The City: After Show but the Canadian TV personality is so much more than that.

Jessi has always known how to make a big entrance. She was born in an A&W restaurant in Calgary, Alberta and grew up in Vancouver, British Columbia.

Talent runs through her blood. Her mother was once a host on CBC and her older sister works as a reporter in Seattle.

And the girl’s got jokes. Before making her big debut on MTV Canada, Jessi was part of a school’s all-male improv comedy group alongside Seth Rogen.

She’s smart, too. She graduated from University of Toronto with a degree in English and Drama.

We caught up with Jessi to find out how she defines her style, her favourite things about Toronto and more. Read our interview below. 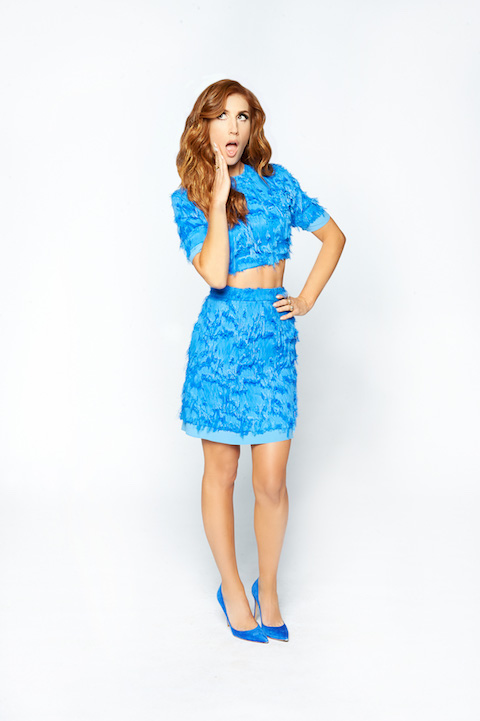 I host the prime time competition series Canada’s Smartest Person, which just finished its 3rd season and The Goods weekdays at 2pm on CBC! I was born in an A&W restaurant in Calgary, Alberta so I guess you could say I was classy from birth.

What are some of your own style ‘rules’ that you like to live by?

I think mixing and matching is the key to owning your own personal style. I would never wear one designer head to toe – I love mixing new with vintage, designer pieces with things I found at a thrift store, bold prints with big patterns, new clothes with old shoes. I like to know that if I wear something out in my life or on my shows, no one else will be wearing it quite like me.

I live part time in LA and part-time in Toronto – safe to say there are a lot of things I would change about LA and America in general right now. Toronto is one of my favourite cities on planet earth, but I will always advocate for more arts funding, more affordable real estate and I would definitely implement more veggie dogs at street meat stands.

List the top five things about Toronto that you love!

1.  It’s a big city that can feel like a small town- you can bump into friends wherever you go.

2. The restaurants are some of the best in the world – it seems like a new cool spot pops up all the time. I could spend a year just eating and drinking my way through this city.

3. Kensington Market. I love vintage shopping and I’ve found some of my most prized possessions digging through shops in Kensington. I also love that no matter how much time passes, the eclectic vibe and cross-cultural energy of this neighbourhood always stays the same.

4. The beards. Only after spending some time away, did I develop a deep appreciation for this city’s facial hair. Toronto has a high volume of dudes with spectacular beards.

5. The creativity in this city is infectious. People who want to get into film or television, to make music or art – this is where they come. Meeting the next generation of creative brains is always inspiring to me.