Retail Council of Canada’s recent report, which shows Canadian malls are beating their U.S. counterparts on many of the measures that count. Huffington Post shares a portion of Retail Council of Canada’s 2016 report and the findings are surprisingly shocking showing that quite a few Canadian malls draw in more traffic than their U.S. counterparts. 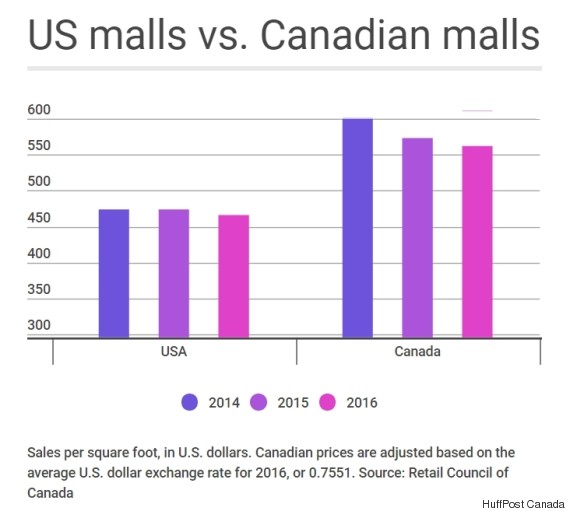 The report speculates why Canadian malls are doing better, going on to say: “One reason is that there is less shopping centre space in Canada. There are 23.6 square feet of mall space per person in the U.S., compared to 16.5 square feet per person in Canada.” This lack of mall space naturally drives the aforementioned findings, in that, since we do have less mall space more people are driven to less square footage in contrast to the U.S. Further on, the report asks: “why are Canada’s centres more productive? Is it because we have less space and are more efficient, or because we pay more for products than in the United States? In an attempt to answer this, I would reference a somewhat known fact that Canada is generally expensive due to a higher cost of living. Approximately 90% of Canadians live within 100 miles of the Canadian-U.S. border so as to why the same item in both countries cost double sometimes triple in Canada is egregious.

Even if you factor in the exchange rate and taxes of many of the items that come into our country they should not cost what they do. Rather than this particular graph just being a reflection of Canadian malls doing better than U.S. ones, I would say it is more a reflection of the high cost of living. 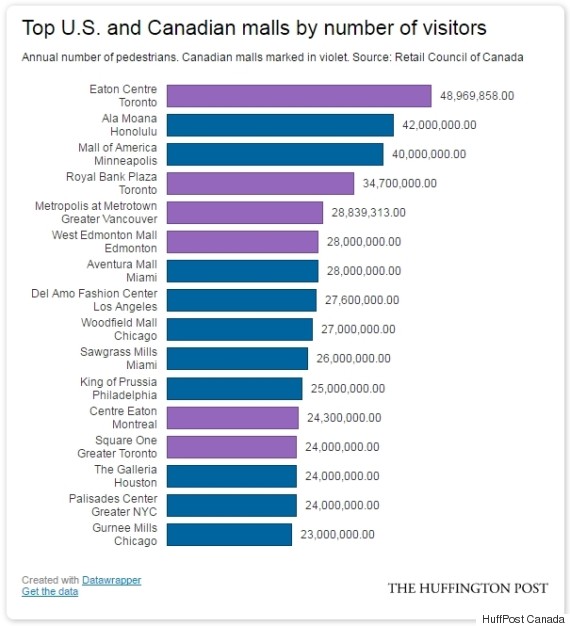 The report also illustrates with a graph that the Eaton Centre has the most visitors between all Canadian and U.S. malls with an annual number of pedestrians at 48,969, 858, in second place is Ala Moana in Hawaii with 42,000,000 visitors. While this information is interesting perhaps, it is trivial, as cash is king. What matters most is not money spent per visitor or revenue per square foot, but simply who made more money. Canadian malls made $744 per square foot in 2015, or $562 in U.S. dollars, which beats US$466 for American malls. The Huffington Post’s reading of the report ends with: “Although Canadian malls make considerably more on average than U.S. ones, the U.S.’s malls for the wealthy and tourist-oriented shopping centres still beat Canadian malls by a long shot. The U.S.’s highest-earning mall is the Bal Harbour Shops complex in the Miami area, with earnings of US$3,185 per square foot in 2015. Canada’s highest earning mall, the Yorkdale Centre in Toronto, earned C$1,650.85 the same year.” This has to do with the lack of wealth in Canada which is impart to our small population. Seemingly in contrast to much of the success of Canadian malls as noted by Retail Council of Canada, Huffington Post features a video at the beginning of the article which notes that Canada’s newest endangered species are shopping malls, that online shopping is eliminating the need for some malls as millions of square feet become redundant every year, and that 76.7 million square feet of retail space is now unnecessary which is equal to all of the malls in Vancouver, Victoria, Halifax, and Ottawa, and that as Canada lags behind the U.S. for online sales it may get worse for retailers.

All images via HuffPost Canada

Is Bed Bath Beyond In Financial Trouble?