There’s just something about a man in a fine tailored suit. Trends may come and go with the change of the seasons, but according to the men of Four Fifty Five, a suit and tie stands the test of time.

Four Fifty Five is a custom men and women’s wear company that “offers quality, affordable [garments] without the snobby, stuck up atmosphere.”

Incubated in the Ryerson Fashion Zone – one of Canada’s first incubators for fashion-inspired businesses – and founded by brothers Jake and Noah Parker, the company made its official launch this past March with their full line of product offering including made-to-measure suits, shirts, coats and accessories.

“When Noah and I were growing up, we were always super fascinated with men’s suiting,” said Jake, the operations director of Four Fifty Five. “We would see old photos of our grandfather in suits and everyone wore suits every single day on their way to work and we would always think, ‘Why don’t people dress like that anymore? Those were so cool.’”

Four Fifty Five’s style is modern and distinguished, and its focus is on quality rather than quantity.

“Everyone else, namely our direct competitors in the affordable made-to-measure market, are racing to sell X million numbers of suits by this year and their racing to open more stores, and I really don’t think guys want to buy their suits from a nice version of Walmart,” said Noah, the creative director of Four Fifty Five. “We’re not trying to be the next largest suit company in the world, we’re really just trying to make nice suits.”

Throughout the month of March, Four Fifty Five hosted two pop-up shops in the downtown Toronto area. With the success of their first pop-ups, the company needed a permanent location for customers to visit.

“Before, the emphasis was on our clothing and that’s really what we tried to build a brand on, the quality of our clothing and the craftsmanship and the experience,” said Noah. “Now that we have a studio space, we’ve built the legitimacy we needed to show people that we’re serious about what we do.”

Hosted in the historic Queen Street East area, the Four Fifty Five design studio opened just a few weeks after the success of the pop-up shops. The studio has a rustic atmosphere to it with a “showroom-esque office space [that] defies the typical startup vibes” one would expect from a small business that is less than a year old.

Visits at the Four Fifty Five studio are by appointment only, however you don’t have to book a fitting to see the space. You can go to browse products or just to hang out with the team as they work or even for some post-work cocktails.

“We wanted a space that our clients and friends could come to knowing that they’d come here and they would have a good experience and they’d share their ideas and check out what we’re offering,” said Jake.

With each team member specializing in a certain area of the business of Four Fifty Five, the company functions like a well oiled machine covering everything from social media to day to day operations of the company to housing grade A fit specialists.

By providing all customers – both men and women – with quality garments and an unforgettable experience at an affordable price, Four Fifty Five isn’t just a clothing brand – it’s a lifestyle.

“It’s part of the atmosphere we are trying to make,” said Noah. “You don’t have to buy from us to come see what we do. We like to have an [open door] situation where people can come in and get an update on everything menswear and then leave without buying anything if they please… If you’re coming in for a single tie, we give you the same time of day as anybody else.”

“We never really intended on making things for women – mostly because we had never done it before. Going into this, we were going to be a menswear company,” said Noah. “We didn’t have the opportunity to sell women’s clothes [but] we really wanted to, so we just decided to get good at it and now it’s proving to be equal to the amount of menswear we sell.”

And authentic custom clothing, regardless of gender, has always been Four Fifty Five’s main focus. 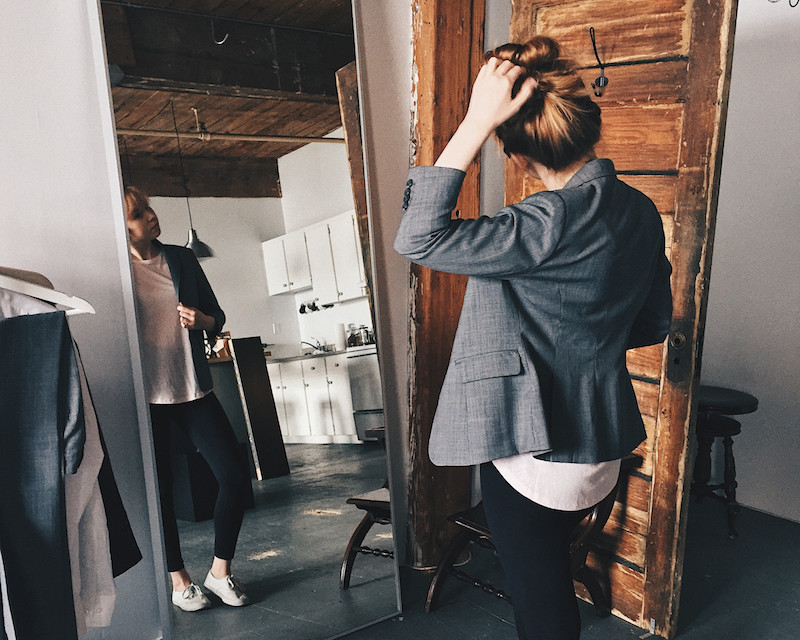 “It’s very important that when you’re wearing a custom garment that you add your personality to it. There’s no rule book on what makes a good suit and what doesn’t… Your own personal touch needs to be there for the suit to be a perfect suit,” said Jake.

Four Fifty Five is Toronto-based and ultimately Toronto-inspired, and the Parker brothers plan on keeping it that way. However, down the road, they would like to open a larger space to have more people come through their doors. Four Fifty Five is also planning a pop-up spree in the upcoming year to introduce the brand to other areas including Hamilton, Ottawa and Montreal.

“A lot of people really like to say they have a guy they go to for their clothing,” said Noah. “When someone asks them where they got their suit, instead of saying, ‘I bought it here, go get one that’s just like it,’ they say something like, ‘I have a guy who makes it custom so this one is only for me.’”

To learn more about Four Fifty Five, visit them at FourFiftyFive.ca.