What do you get when you cross a makeup junkie with a dollar store fan? Hi, how are ya? That’s me.

Whether it’s a quick jaunt to Sephora or a stop at Shoppers Drug Mart, I am not picky about what brands I try out. In fact, 90% of the time, I prefer a good drugstore brand to any of the high-end ones. Drugstore makeup is where it’s at.

I’ll get this out of the way: I definitely still have eyes. And lips. Dollarama makeup didn’t, as I feared, cause any kind of allergic reaction on my face. So, yes, it’s definitely safe to use — even for those of us with really sensitive skin.

The selection of makeup, however, was not the best. Products vary from Dollarama to Dollarama (the one I was in most recently had a particularly great arts and crafts section), and the ones I checked out all seemed to carry a small stock of product. However, with a $20 budget and the determination to make this work, I came away with 5 key products I figured were worth checking out. 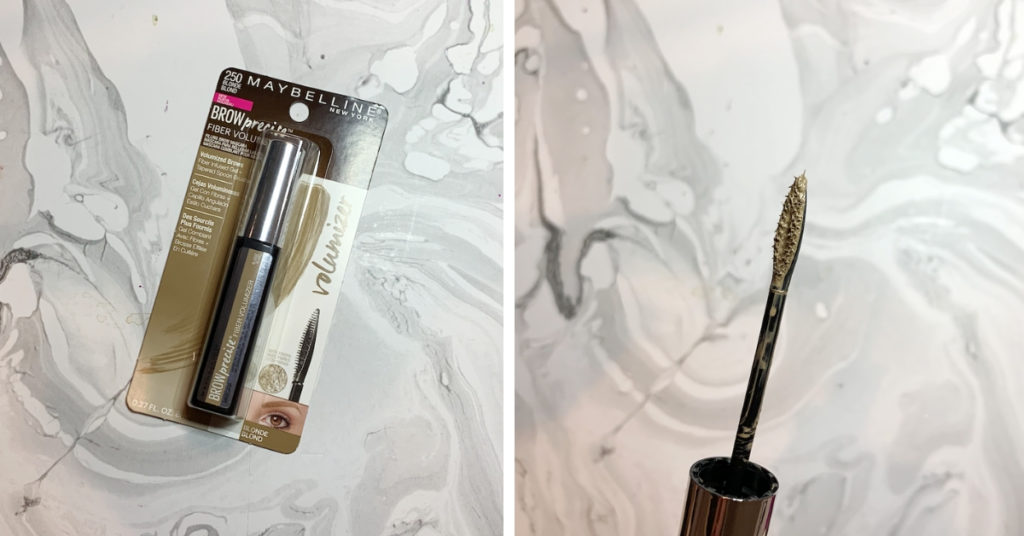 First of all, yes! Strangely, Dollarama does carry some drugstore brands. At the locations I hit up, I found Maybelline, Wet n Wild, CoverGirl, Revlon and more. The shade selection is virtually nonexistent, with most stores only carrying one of each, but I did manage to find a “blonde” brow product at one store.

One of the first things I tested was the product’s smell. Since it’s at Dollarama, I wasn’t too sure whether the product was expired. The minute I opened up the tube, a sharp smell hit my nose. Sharp, stale, or alcohol-like smells are sure-fire giveaways that your makeup has kicked the bucket.

However, since I did make myself a guinea pig, I decided to give it a shot.

Ah, the things I do for beauty.

The hair-like fibres floating in the brow gel threw me off a little, because they kind of look…well, gross. But those were just the aforementioned fibres. The spoon applicator is clumsy and badly shaped. It was impossible to swatch on my arm or the back of my hand, too.

I had more luck with the application straight to my eyebrows. The gel and fibres went on generously, but they quickly globbed together. I’d recommend short, quick strokes over the long ones I tried out. I’d also recommend only giving this one pass over your brows — two resulted in me getting dry globs (ew) all over my face and brow area. The gel dries very quickly, and clumps up like the worst of mascaras. I wound up using my own brow pencil to try and even out patchy areas and to actually define my brows. Not cute.

Also, please don’t use expired makeup. It’s just a bad idea. Let me make those questionable choices for you.

Rating: ?. It has promise, but the applicator kills the whole product. 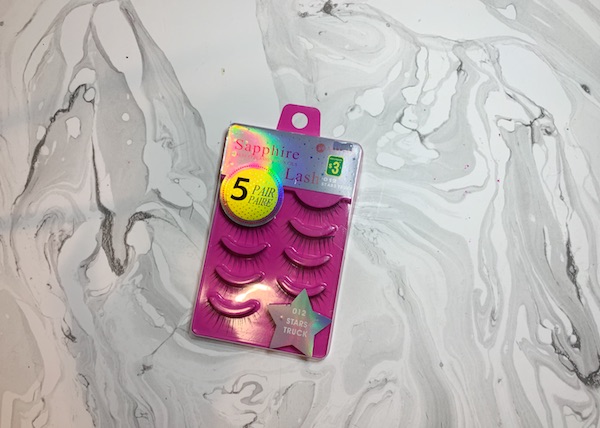 Finally, some unique Dollarama makeup! Lashes are a must in today’s beauty world, and also really, really hard to get right. Since luxury lashes can set you back a whopping $38 for a single pair, it makes sense to do some bargain hunting.

I would say give these a pass.

You can get pretty good lashes for a reasonable price, like an Ardell set for $7.99. You cannot get a good pair at Dollarama for $3. These lashes behaved entirely like stiff plastic, and felt the same way.

I used some standard lash glue to place these on my own lashes. They applied fine, which is perhaps the high point of them. However, they were spiky, awkward, and very unyielding — they weren’t super into curving to match my eye shape, or to having mascara applied to them to help them blend with my natural lashes better. The bristles were oddly thick, too.

Rating: ?. They’ll do in a pinch, but if you’re near a Dollarama, you’ll likely be near a Shoppers. Get better lashes at Shoppers. 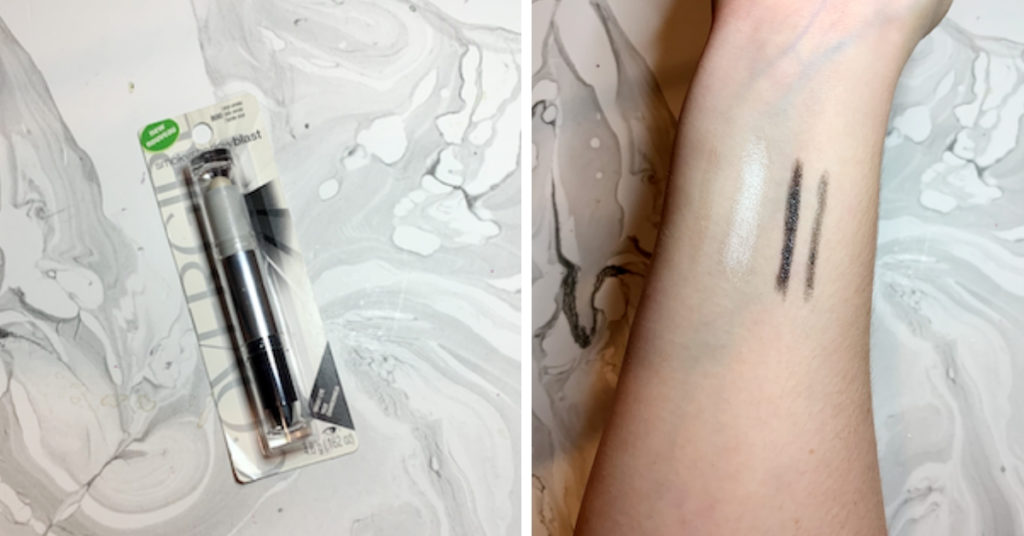 I hate this product.

Sorry, my bad. What I meant to say was that I really, really hate this product. It’s meant to be a 2-in-1 solution to a smokey eye, with two cream sticks stuck on either end of a plastic applicator that — spoiler alert — doesn’t do much to actually hold its product in place. (Yes, that means I dropped the whole black shadow cream stick onto my pants. No, I do not want to talk about it.)

The black cream shadow stick wasn’t half bad. As you can see from the swatches, it doesn’t start out as much, but it builds nicely with a few strokes. It also blends quite well, though I quickly discovered that the reason for that was because the product is just plain greasy. Grease tends to blend, you see.

The white cream shadow may as well have not been there at all. I managed to get some pigment out of it after many passes over my arm, but my eye wasn’t so lucky. It wound up making my eyelid look almost grey, and the greasy texture just slid the sparkle around more than anything.

Of course, it creased and smudged immediately. It began to disappear even as I blinked, and it survived about 2 minutes under my eyes. The shadow never dried down, so it just moved and moved. In the end, I was left with what I imagine a good smokey eye would look like after wearing it for two days straight, including showering in it. 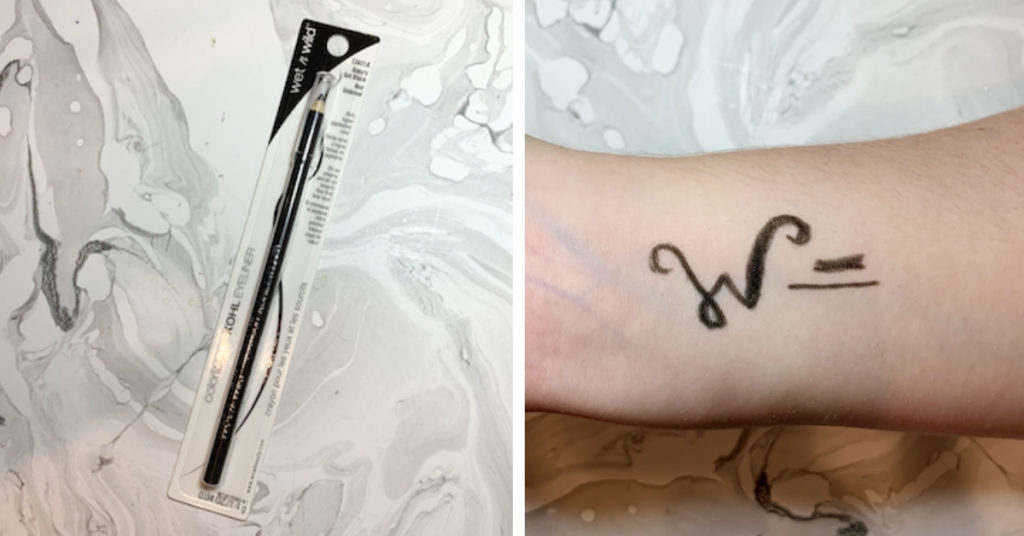 This is a solid pencil that you should not pay $4, but $0.99 is fine by me. It behaves much the way MAC’s Eye Kohl does, in my opinion, in that it smudges nicely and has good pigmentation, but slips and slides and has a hard time not migrating around your eye.

I couldn’t keep this product on my waterline to save my life. It did, however, perform better than the CoverGirl black shadow stick, but the bar was pretty low there.

Rating: ?. You could do better, and you should — you deserve it. 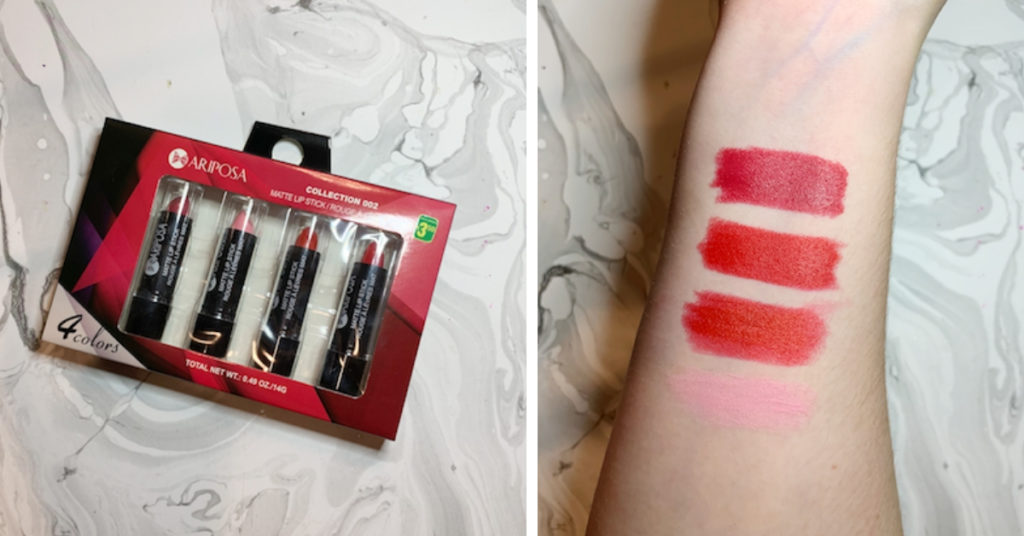 Okay, well, first of all, these are not all matte, so let’s just say that up front.

Second of all, these are amazing. Aside from the obvious weak link with the pink, these lipsticks performed like a dream. After four duds with the other products, I was actually excited to swatch these and find that they were good. Is that a little sad? You know what, maybe it is. Moving on.

The three unnamed reds all have gold micro-shimmer in them, so throw any idea of a matte lip out the window. However, they have so much going for them: they’re smooth, creamy, comfortable, pigmented, and they sure do last. Swatching them actually stained my arm, so you can bet they also stayed on my lips for a long time.

Two of the reds are pretty similar in shade, as you can see from the swatches. The middle shades have enough subtle differences to read slightly warm (second from bottom) and slightly cool (second from top). The second bottom shade leans pretty coral. The standout is obviously the top dark red, which is going to park itself in my rotating red lipstick collection as soon as I’m done writing. I’m nuts about it.

The pink one…it was nice of you to show up, bud, and you can have a participation trophy if you want. Your streakiness, lack of pigmentation, and overall bad colour brought you way down, but you do get points for being the only true matte in the bunch.

Rating: ?. I am finally proud of you, Dollarama. This is a solid set for a small amount of money.

Thank you for joining me on my journey through dollar store makeup. I get the feeling we’re just getting started — who knows what treasures await us in the land where things are supposed to be $1, but rarely are.