Our next Style Spotlight might be the city’s most eligible bachelor.

Allow us to introduce you to Mike Ward.

The Toronto-based Australian native is a sight for sore eyes, but it’s his resume that’ll really grab your attention. Not only is he a celebrity chef, he’s a food writer and photographer, too. His knowledge of the kitchen has gotten him gigs in some of Toronto’s most notable kitchens, writing for top publications, and most recently, hosting a weekly radio show with Sirius XM.

With a cookbook in the works, he’s certainly a busy man, but we had the opportunity to talk to him about the surprising place he shops for groceries, the one thing he’d like to see happen in Ontario, and more. Take a peek at the interview below. 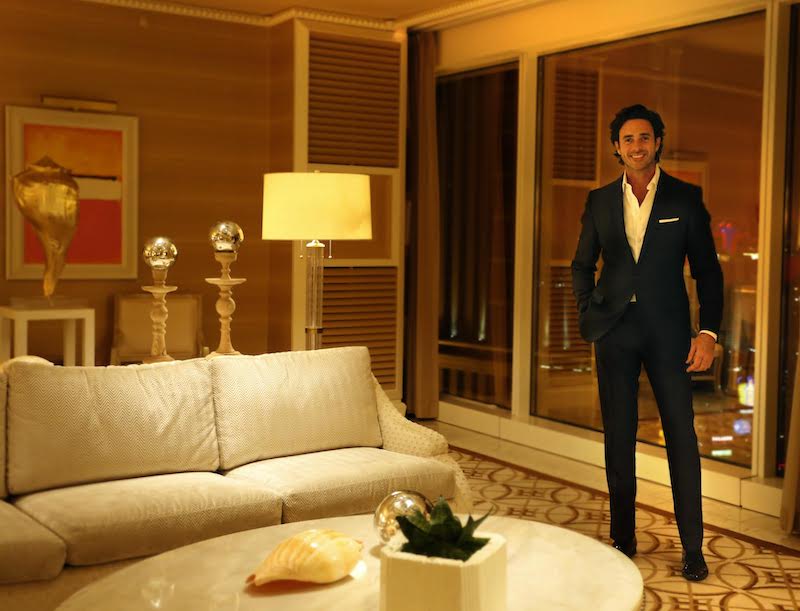 I’m a chef and food journalist. Single father to two young lovely little princesses (who are adorable 95% of the time and little sh#%s the other 5). I’m also a passionate freedom fighter against boring food snobs… That includes people who treat bacon as a religion. I do, however, admit I occasionally eat things I probably shouldn’t between the hours of midnight and 1 am. But don’t we all?! I’m also host a weekly food radio show on SiriusXM called Devour and just signed a deal for my first cookbook… So as you might be able to predict, I’m sometimes tired and occasionally cranky.

I’m fortunate to have seen most of the world, in fact, it’s shorter for me to list the countries I haven’t been to than the ones I have. So… I feel I can say, with some confidence, Toronto is truly one of the loveliest cities on earth. Growing up in Sydney, Australia, I’m certainly spoiled by a city’s aesthetic beauty. But what Toronto may lack in exceptional scenery, it gushes with in personality. It’s hard for me to find something I dislike… But if my arm was twisted, I would really love to see more liberal liquor laws, specifically in Ontario. It’s archaic to me that the alcohol industry is government controlled in 2017. We should be able to buy a six pack of beer or a great bottle of wine almost anywhere at anytime. We are adults.

Where is your go-to shopping destination in the city?

I could play the boring celebrity chef card and bullshit you now by telling you about my favourite farmers market, or a beautiful artisanal butcher, or cheese store I go to regularly, but the truth is, I’m just like you. I buy my groceries at whatever supermarket is closest. Yes, my passion is cooking, but it goes beyond that. I find true passion in creating dishes that are greater than the sum of their parts. For me, nothing is more fun than cracking a bottle of wine and making dinner for half a dozen good friends without spending a fortune. That, for me, is both fun and challenging. It’s not that I’m cheap, quite the contrary. But anybody can go and buy $30 steaks and $15 pieces of fish and turn it into a decent meal. It’s far more interesting to me to make things out of what’s abundant and accessible. I butt heads with a lot of chefs over this philosophy: a true craftsperson shouldn’t need the absolute best ingredients to create a mind blowing meal.

List the top five things about your city that you love!

I could easily tell you 20 things I love about Toronto, but there’s one I still find the most glorious. Until kinda recently, I was dating a woman that lived in New York, so I would spend a lot of time there. As much as people go gaga over that town, I found myself getting sick of it. Great for a long weekend, but it begins to feel like a city of caged rats. People in Toronto say hello, they acknowledge you. We walk around with our heads up. Toronto is a perfect example of a world class city.