CBC is reporting that Walmart Canada pulled a line of women’s T-shirts from their website after receiving multiple complaints that the shirts and their product description were offensive and sexist.

According to CBC, the shirts were sold on the site by third-party retailer IceJerseys. The tees were created in 2010 by Arizona sports apparel company Sauce Hockey. The former Arizona Coyotes hockey player, Paul Bissonnette, a Canadian, even held a stake in the company when the line was launched.

“I realize that some of the company’s references used [with] T-shirts in 2010 were offensive to women and I sincerely apologize for that,” Paul Bissonnette said in a statement. “I was young and immature but I’ve moved on and I in no way support those references now.” Apparently, he parted ways with the company three years ago. 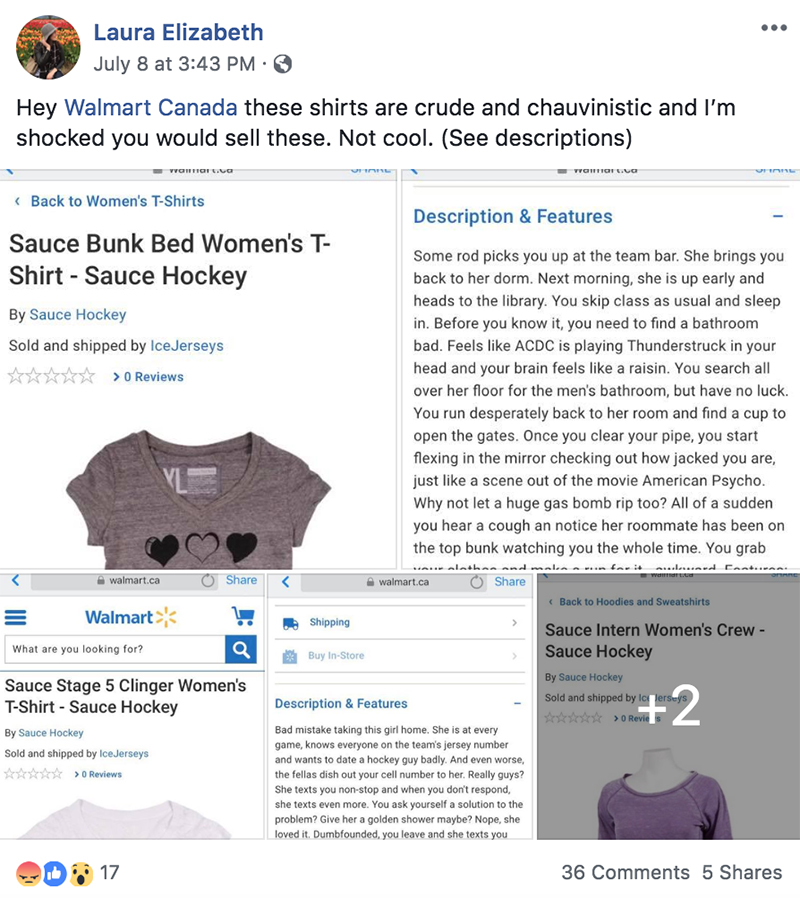 “The descriptions included tales of female groupies who serve as sex objects for hockey players and enjoy a golden shower.”

“We sincerely apologize for any unintended offence this has caused our customers,” said Walmart Canada spokesperson Anika Malik in an email. “The descriptions accompanying these tees do not represent Walmart’s values and have no place on our site.”

It seems the current owners of Sauce Hockey are also shocked over the descriptions.

“It’s offensive and sexist. There’s no question,” said Daryl Jones, one of the company’s investors. The company says it has reached out to Amazon, which still has some of the T-shirts, along with the product descriptions on its U.S. site via a different third-party dealer. Apparently, Amazon told CBC News it was investigating the matter.”

The featured image description reads: “Every team seems to have that one girl who works her way thru the entire roster. She’s super into you at first, but when things go sour, she ends up with your teammate via the waiver wire. Before you know it she’s thru the four forward lines and half way thru the top D pair and it’s only November…”