Those who are old enough can vaguely remember the excitement when a glossy new Sears catalogue arrived in the mail (it was discontinued back in 1993). Of course, those were much better days for the now failing department store, which got its start in 1893.

Though Sears fought a long and hard battle, the onetime mall staple just couldn’t compete in the 2000s retail climate.

The company filed for Chapter 11 bankruptcy on October 15 2018, listing $6.9 billion in assets and $11.3 billion in liabilities. It announced it would close an additional 142 stores by the end of the year (which have now presumably closed their doors), in addition to 46 stores that were to close by November of last year. Of course, this didn’t come as a huge surprise to anyone.

For the past decade, Sears – once the largest retailer in the U.S.– has experienced declining comparable sales, as well as annual losses since 2010. In response to slumping sales, Sears began to close stores in the past ten years, and had shuttered nearly three-quarters of its stores when it announced its bankruptcy filing.

So, what went wrong?

A handful of things, it appears. While it focused on the home in its early days, some point to a diversification into other products and services as contributors in the company’s gradual demise.

Sears ventured into insurance in 1931 and stock broking and commercial properties in the 1980s. In his book “The Hard Road to the Softer Side: Lessons from the Transformation of Sears,” former Sears CEO Arthur Martinez blamed the diversification for a loss of focus for the brand.

Sears lost its title as the largest retailer in the U.S. to Walmart in the early 1990s, thanks to Walmart’s wider variety of goods at lower prices and a culture of educated consumers with options. At the same time, people began to turn to places like Home Depot, Target, and Costco for their home needs.

Though the emergence of online shopping has undoubtedly impacted the store closings, Sears was actually an early adopter of the online world, introducing the sale of everything from electronics and home appliances to toys on sears.com in 2000.

This was just eight months after online retail giant Amazon started to expand its offerings from books, to include computer goods, home improvement items, and video games. By this time, job cuttings and store closings had already become commonplace for Sears in order to maintain profitability.

In recent decades, attempts to keep with the competition included things like the rollout of Internet cafes in 2006 and 2007 in some 100 locations.

Sears also attempted to adopt a “store within a store” model of business, an initiative that began with the purchase of retailer Lands’ End, which Sears owned from 2002 to 2014. Clearly, the model didn’t stick.

Sears merged with a failing Kmart in 2005 to become Sears Holdings in an $11-billion dollar deal that was engineered by Wall Street hedge fund billionaire Eddie Lampert, who took control of Sears in 2013, becoming its CEO. Today, many people blame the billionaire for the company’s bankruptcy, citing the lack of sense it made for Sears to buy another retailer who was not doing well. In the decade following the merger, Sears really began to slide.

The problem was, according to experts, that he didn’t invest this to rebuild the business. While the company was valued at $11 billion on the stock market at the time of its merger, by October 2018, it was just $37 million. He stepped down from his role as CEO at this time, but remains chairman and Sears’ largest shareholder and has stated publicly that he wanted to save the company.

Some point to the rise in online shopping and the shift away from the mall for the demise of Sears. But it hasn’t seemed to hurt Canada’s forever-iconic Hudson’s Bay Centre. While stores like The Bay have made efforts to upgrade the in-store experience to retain foot traffic, Sears stores became almost dingy and in need of repair.

There are no more Sears stores left in Canada as of January 2018. 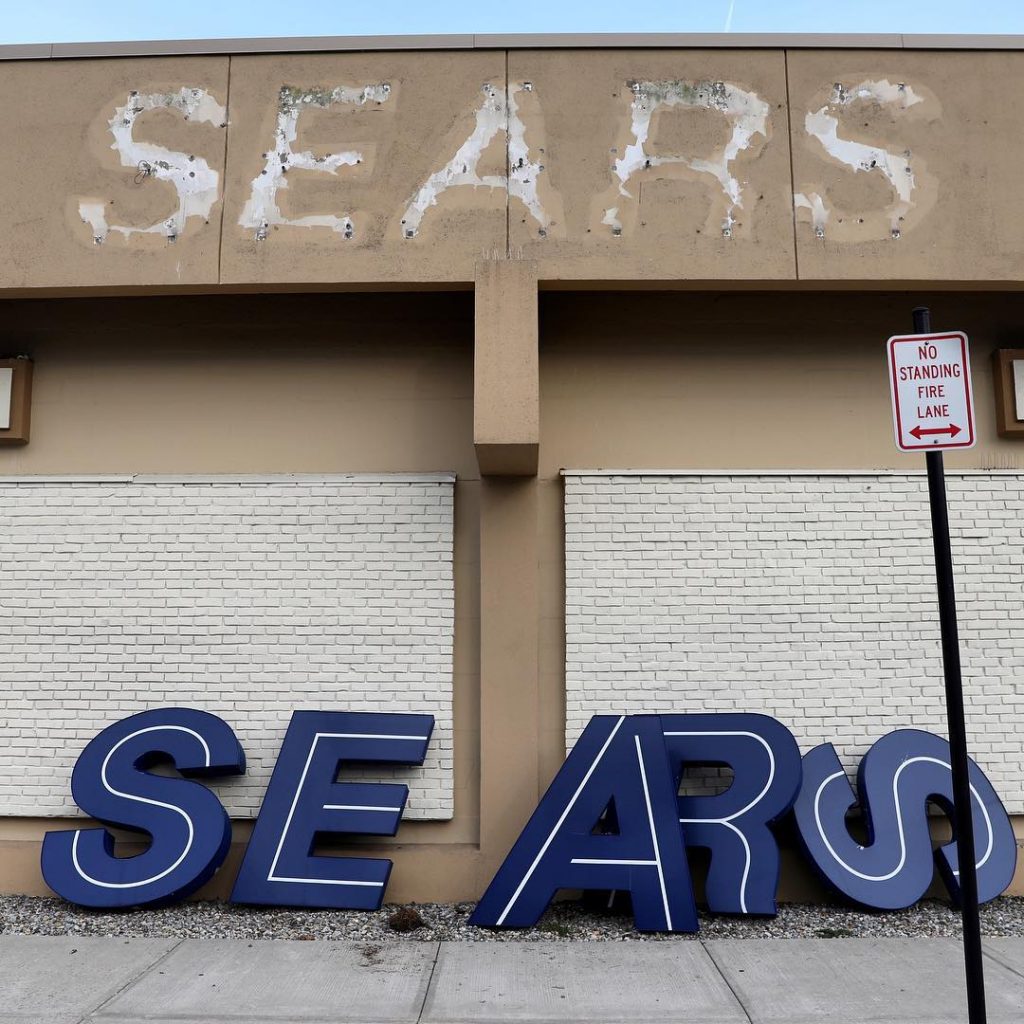 Instagram/ @noticiastelemundoAs if the abandoned stores across North America weren’t enough, Sears saw the departure of some of its largest longtime vendors in October 2017, including Maytag, KitchenAid, and – most notably – Whirlpool, which Sears started selling in 1916.

While Sears is still in business – with some 425 locations still up and running in the U.S. – the company is clearly holding on for dear life.

On Monday, January 14, a bankruptcy court held an auction that pitted Lampert and his over $5-billion offer (made by ESL Investments, the hedge fun run by Lampert) against companies wanting to sell Sears for scrap value. While Sears’ creditors and independent board members want to shut down operations of both Sears and Kmart, Lampert wants to keep the existing stores up and running, saving roughly 50,000 jobs in the process.

At time of writing, the winning bidder was yet to be announced. Either way, it generally doesn’t look good for Sears, as the company remains on life support. So, if you have Sears gift certificates collecting dust, you may want to cross the border and spend them ASAP.

Sears is Closing 48 More Stores Despite Recent Rebranding
Sears is Trying to Be Cool But is It Too Late?
It Seems Like Trouble Is Brewing For Once-Popular Home Retail Chain
5 Stores Closing In Toronto This Month
5 Retailers That Could Be At Risk In The Future

12 Aritzia Secrets To Know The Next Time You Shop

16 Online Retailers To Shop That Ship The Fastest

13 Of The Best Vintage Stores In Toronto