There is no doubt about it, ugly is in. Just take Balenciaga’s ridiculously blinged out, platform crocs (they sold out before they were even released), or this Gucci fanny pack that retails for over $1,500.

It’s quite clear that there is something about ugly that people love, but what is it? Why are people willing to dish out wads of cash for garish fashion and why has ‘ugly’  become so covetable?

The ‘consumer appeal is understandable’ states The Business of Fashion. There’s an obvious appeal in comfort, so many designers benefit from selling their own luxury versions of things deemed ugly.

Christopher Kane was quoted telling The Financial Times, “There is no getting around it, Crocs are ugly… It’s a bonus that they are so comfortable, that’s the whole point, that’s their charm.”

But there has to be more than just comfort involved. If that was the case, why not just buy the original version of a croc for a fraction of the price?

The answer falls to the power of the brand’s name. Rather than just being ‘plain ugly’ it’s ‘designer ugly’. If any ugly was acceptable we’d be championing every poorly dressed father for their ‘cool dad style.’ Popular ugly differs because it has been given a stamp of approval by some of the world’s most influential tastemakers. 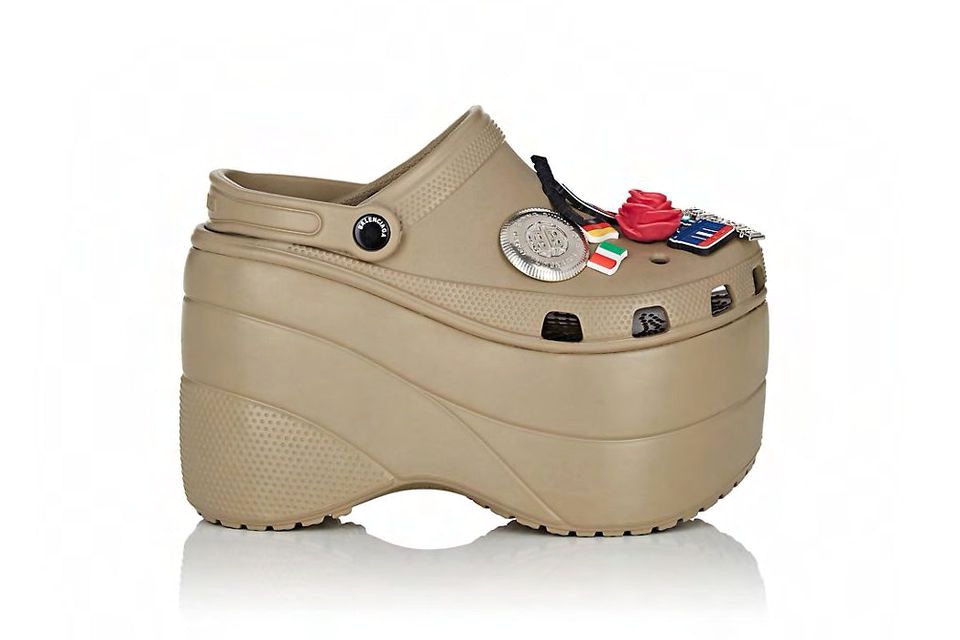 Along with functionality and brand power, crossover items like Christopher Kane or Balenciaga Croc’s are also often cheaper. For example, the Christopher Kane crocs retailed for $623, which may seem expensive, but when compared to the price of a regular pair of designer shoes, is much more affordable.

It turns out it’s as much about comfort, as it is unfamiliarity. Most people don’t associate ugly with high-end, so there’s a juxtaposition that adds interest. This coupled with a more reasonable price might be why hideous shoes, especially, seem to be the gateway to ugly fashion.

Miuccia Prada, is another prime example of this contrast, being one designer who’s built an entire luxury empire around ugly… she’s even based collections off the thing’s she hates. The designer once said, “Ugly is attractive, ugly is exciting. Maybe because it is newer.”

When put like that, you realize that there is this novelty surrounding ugly fashion. It’s something people have never seen before, it’s shocking and it’s memorable. Good taste is saturated, while ‘tasteless’ makes headlines. Whether you’re a fan or not, you remember it.

It’s something people have never seen before, it’s shocking and it’s memorable. Good taste is saturated, while ‘tasteless’ makes headlines

This obsession with novel things would also explain why creating this ‘ridiculous space’ works so well. It draws attention, interest, disgust – it creates a reaction similar to that of viral videos and posts on the Internet. It’s almost too weird to believe and in a retail environment that struggles to create newness, this is desirable.

Ryerson’s Tanya White tells the Globe and Mail that she believes it’s a ‘reaction to both the speed and ubiquity of fashion – it simply has nowhere else to go.’ She states that “…we’ve come to a point where the cycles are moving so quickly that it’s difficult to find new aesthetics and new ideas.”

Rather than recycling beautiful fashions that have been done hundreds of times, why not disrupt the system? What is beauty anyway? “People are drawn to bad taste fashion because – well, it’s so bad it’s good,” says Vogue news writer Liana Satenstein.

Perhaps it’s also a reflection of beauty ideals evolving or society undergoing changes in power distance. If categories of low and high culture can mix, that’s a sign of a more ambiguous line between class and style; people have more freedom to dress. It’s less about showing one’s status, as it is about dressing for entertainment.

You could say that perhaps the fashion world, which is often deemed pretentious, is only trying to have a little fun. One would have to agree that there is definitely a certain irony in a designer croc or an ugly sneaker that makes you chuckle.

Sources: Business of Fashion, The Financial Times, The Globe and Mail, High Snobiety